Abby has had a day and a half luxury of sitting in one of the middle captain’s chairs in the car.  She is usually stuck in the back because both boys are in car seats and it just doesn’t work to haul them in there – believe me I tried.

So I warned her it was her last ride in the middle for a while and she was very theatrically disappointed, hand on chin, “But the boys get to do so many things that I don’t get to do!”

“Did you know why I said “DON’T GET” like “DON’T GET”? I said that because I want to sound like a first grader.”

“You are a first grader.”

“I know, but I want to sound more like one so other people know and so I remember.” 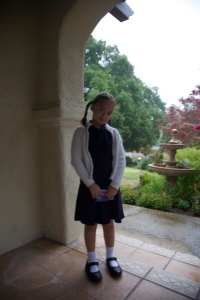 You are currently reading A First Grader at Ada Takes.